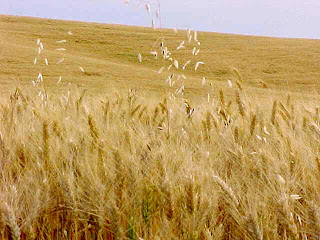 Several months ago, God impressed upon me the notion to be very careful how I acted towards others. The Bible says in Galatians 6:7 that whatever we sow (plant), that is what we'll reap (harvest). He impressed upon me the need to pray every day to only sow desireable things in others' lives.
I've seen these past months many folks who have harvested undesirable outcomes--sometimes immediately, sometimes years later. Some of these have been very mature believers. Almost all of these people have been totally unaware of what they were planting when they acted the way they did.
Some have ripped people off. Then gotten ripped off.
Some have tried to silence another's ministry. Their ministry has been silenced.
Some missionaries have tried to get others sent home. They are home now.
Some missionaries tried to force families to live in unsuitable housing conditions. They then were moved into unsuitable housing conditions.
NONE of these people realize how they planted the seed of the harvest they recieved. Most of them thought they were doing the right thing at the time.
I once heard Josh McDowell teach the three laws of sowing and reaping:
1. We reap what we sow. You can't plant rhubarb and harvest roses.
2. We reap after we sow. We plant, then there is a waiting season, then the harvest.
3. We reap more than we sow. It multiplies before we collect it.
When I pray my daily prayers, I often ask God to help me not sow anything undesirable. When I find something undesirable happening in my life, I do make it a matter of prayer to ask how I sowed it. (I rarely get an answer on this one, but I thought I'd throw it out there anyway).

On a more positive note, this truth means that we need never be afraid to give. We will not find ourselves diminished in any way, only blessed.
Posted by Campbell Dunson at 12:50 PM