Ordered Steps (or All Roads Lead to the Mall) 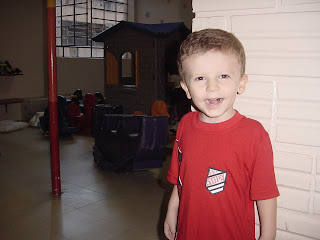 I had a pretty typical Missionary Mom morning—typical for a first-year language student, that is. Since I'm in my 8th year of service, it was pretty frustrating!

You see, every morning I pray that our steps would be ordered by God, that he would order our day to save us time and cause us to be where He wants us at the right time. This morning Jeff had a meeting with the Big Important National Guy who's in town this week. I slept through our alarm and in our haste to get Jeff out the door to meet Big Important National Guy, I missed my prayers.

Jeff took Parker to school and then drove the car to his meeting. We agreed that he would call me if I needed to pick Parker up from school at noon. I realized about 11:00 that I would have to get Parker, as Big Important National Guy and the networking opps that would surround his visit would certainly last most of the day. That's also when I realized that Jeff had both strollers in the car with him. At about that same time a still, small voice told me I would be eating lunch at McDonald's. I chalked this last revelation up to my active imagination since, with no car and no stroller, McDonald's would be no fun.

It's only about a half-mile to the preschool and it was a pretty spring day, so I thought I'd walk and see if Parker could make the walk home on foot. I realized at the first stoplight this wasn't going to happen and, since finding a taxi at noon is nearly impossible, decided to try and catch a bus. There is a bus that turns the corner we were standing on and goes right by our house. This bus, I thought, was at the stoplight, so I flagged down the driver and we got on. Parker was thrilled, and we had great fun singing the Wheels on the Bus song. The bus didn't turn the corner.

I told Parker we'd be on the bus for awhile and, eventually, we ended up at the mall. I tried to explain to the driver that I'd gotten on the wrong bus and I needed to know which bus to get on to get home. He couldn't fathom someone trying to take a bus for a half-mile, since he probably walks that far to catch his bus every morning. He never understood my question and we both gave up.

We were, however, at the mall, which is where McDonald's is and I suggested we lunch at McDonald's.

Parker: NO! I want to get on a Taxi! Taxi Mommy, taxi!
Mommy: Don't you want a hamburger first, taxi later?
Park: NO! Taxi!
Mommy: You'd rather go home and eat soup than get a happy meal at McDonald's?
Park: YES. I wanna go home! I DON'T want McDonald's! NO MCDONALD'S!
Mom: OK (thinking it really must've been my imagination, and it's certainly more economical) we'll go home.

We get in a taxi. Give the driver the address and he sets his meter and pulls off.

Parker: Are we going to McDonald's? I want McDonald's.

I sheepishly asked the driver could we exit and catch him later, he agreed, and a very tired Parker and frustrated Mommy headed towards McDonald's. I vowed never to sleep through my morning prayers again, and never let the kid make another decision. No ordered steps for me today!

We had McDonald's and coffee. We did have fun, but I was feeling really guilty as this side trip probably meant that I wouldn't be able to work with Parker on the computer today. I've been trying to teach him how to use the mouse and get him comfortable with the computer. We have a couple of programs, but it's been really slow-going. They're either too easy (wave the mouse anywhere or get a response) or way too hard (read sentences and respond with complicated choices). Blake was quite proficient on the computer at this age and I was really feeling bad that we haven't given Parker the attention and opportunities we gave Blake to develop new skills. I pledged to do better tomorrow and took the opportunity to shop a little for Jeff's birthday. In the video game store we found a CD-ROM, not for Daddy, but for Parker. It's a Pooh CD, originally made in the US for reinforcing early reading skills, being marketed here as ESL practice for kids (cheaper than translating the program into Portuguese).

We finally made it home and after nap Parker remembered his new CD. We popped it in and he went at it! It was exactly what we needed to practice our mouse work! I was also amazed at how many letters he already knew. We worked together for about 45 minutes and then I actually left him to practice alone while I cooked supper.

Posted by Campbell Dunson at 10:22 PM

mcds makes it all better :)
hey cam! i've been checking out your blog as i try to build mine. it's great! i am still learning more, and will probably skype you soon :)
btw, thomas, tim, and i loved watching 24, but all of us agonized when it stopped in the middle of the season! aawww! you got us hooked :)

I found your post through Jeff's. I was a journeyman in Novo Hamburgo in 1996...taking the bus was always an adventure! I have two small children now, 5 & 2, and it is always amazing to see how God orders our steps. I enjoy your blog about your life in Brazil. Thank you for sharing!