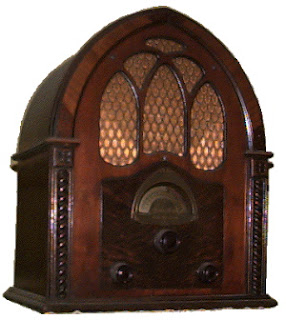 I love radio. Always have. I don't know if it's just that I'm too lazy to deal with CDs or what. I suspect it's my extreme passivity that prefers to be surprised by what pops up next on the radio.
There's also the "company factor." CDs are just music. Radio is someone playing music and listening with you. Commenting on it, making jokes, you know. Research shows that, despite the public's continuous cry for "less talk, more tunes", stations that do nothing but play music (no DJs, no commercials) don't get listeners.
As a teenager, I would spend hours cuddled up with the radio. Fine-tuning the AM dial after dark to see how far I could get. I dreamed of picking up K-Love from Chicago in my home in South Carolina. Never did, but had a good time trying.
I remember getting excited about the possibility of one day moving to Alaska and beaming radio into the Soviet Union.
In high school, I volunteered at the local radio station. It was exciting to get to actually see the personalities I had envisioned for so many years. I audited college courses on the radio. Dr. Belcher took us through books of the Bible. I remember sunbathing and diligently studying the book of James.
I went to work for the same radio station later on. There I made a startling discovery. Working in radio is EXCRUTIATINGLY BORING! If you're an on-air personality, you sit alone in a room or, worse yet, if you're a morning personality, you sit in a small room with the same one or two people EVERY SINGLE DAY. Day after day, month after month, year after year. You punch the same button at 6:32 EVERY SINGLE MORNING OF EVERY SINGLE WORKDAY OF EVERY SINGLE MONTH. You never see your audience, and when you do it's creepy. They know you and are thrilled to see you but you have never seen them.
I was not an on-air personality, I was in PR. I only had to do the same thing every single year. I lasted three years.
I do believe that radio and TV are excellent investments of our ministry time, efforts and dollars. I do believe that they are the most efficient, one of the most effective, and dollarsmart ways of reaching our culture today. I am probably the only person in blogtown who believes that the TV station of NAMB was a good use of missions money, even if it wasn't self-supporting.
I have lately fallen in love with internet radio. With the click of a mouse I can hear my station from back home, NPR, or an endless randomization of 80s hits. There's even an all-barouque station for the Suzuki mom in me! It's great!
Posted by Campbell Dunson at 10:21 PM