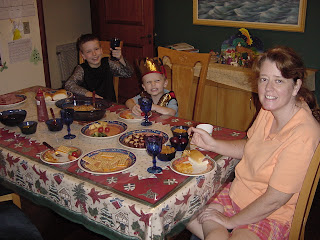 Sorry, I'm running a little late.
I hope that everyone had a very happy holiday season. We really did.
We spent our December in Porto Alegre as a family, just the four of us.

We had never had Christmas with just the four of us, so I wanted to take the chance to really teach the kids about Christmas, what it means, and start some traditions for them to enjoy through the years. (This was all inspired by the fact that we spent the entire day of Thanksgiving in the car rushing to get to Florianopolis that we totally forgot to ACTUALLY GIVE THANKS or EVEN TALK about the holiday with the kids). [BAD missionary mom, BAD, BAD missionary mom]

Anyway, we did have a good season. Here are some things we did:

We listened to LOTS of Chrismas music. I DO recommend Charlie Brown Christmas, I DO NOT recommend Christmas with the Rat Pack (they change a lot of words to things that were apparently cute back in the 1950s). We really enjoyed, as much as anything, the weekly Free on Itunes holiday choices.

We watched some Christmas specials, but not nearly enough. Surprisingly, I DO recommend Mr. Bean's Christmas. I think it will turn into a family tradition. It's the funniest I've ever seen of Bean. Next year, we'll get on Amazon in September and order some DVDs.

We re-created, sort of, my mother-in-law's tradition of a Christmas Eve hors d'oeuvres buffet. We called it our "Feast of Festive Finery." Of course, "Finery" is a lot easier to pull off when the audience is 3 and 8 years old. Vienna sausages and cheese cubes are very chique.
We discovered we owned two Christmas trees. How this happened? I have no idea.

I learned how to NOT buy a Christmas ham in Brazil. After 3 tries I DID learn to:
a. Make sure that the wording "pre-cooked" is on the package. (if you don't, you'll defrost 10 pounds of raw pork that takes approximately 18 hours in the oven to cook).
b. Avoid anything that comes in a perfectly spherical shape, especially if they have 30 of them in a row on the shelf.
c. Enjoy turkey for Christmas.

Although, we did enjoy a great "Week of Pork" following Christmas, in which I made Barbeque from the mistaken ham attempts.

I did make some resolutions for Holiday Season 2008. I resolve to:

Put up the decorations earlier. This always trips me up, as we travel for Thanksgiving. We frequently don't get them up before mid-December. Next year, I'll try for December 1st.

Shop all year long, putting items in my "gift idea list" on Amazon. Then, fill the cart and place the order on December 1st. This year I left all shopping for the last minute and almost missed some gifts getting there on time, not to mention my gift-giving discernment probably wasn't at it's best. [Didn't you know 2008 was the UN declared "Year of the Polartec Vest"?]

Use Amazon's wrapping service. My best friend used this service this year, and it really works well. Gifts come in a nice pretty box with a label. This eliminates the need for a cryptic email sent weeks prior in which you try to describe whose gift is whose without actually describing the gifts.
Enjoy turkey for Christmas. Continue the Barbeque week tradition following.
Well, I hope by posting those to hold myself to them next year. Have a very Happy New Year!
Posted by Campbell Dunson at 12:05 PM