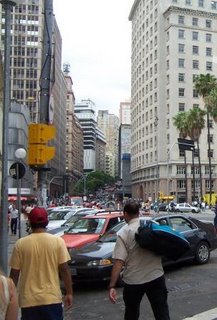 Folks, I'm tellin' ya' --you haven't lived until you've explored the central shopping district of a major South American city! I went yesterday to Centro Porto Alegre.
Every city in Brazil has a Centro. Centro is the oldest area of town. It's where the bus lines all end. It's where the working class does their shopping. It's also where the thieving class does their thieving. So whenever I go to Centro, I try to walk, look and act very thug-like. It's very difficult to drive to Centro and so you have to take the bus. It's a real adventure.
It's cold here in Porto Alegre and, seeing that it's time to put the down comforter on the bed, I went to the "sewing notions" district of Centro to get some snaps to make the comforter cover. YES! -- an entire DISTRICT of sewing notions stores! About 4 blocks of beads, pins, needles, zippers, pin cushions, measuring tapes, and literally TONS of yarn! If you can imagine it, it's down there somewhere and if you can remember the word in Portuguese, you can buy it. Of course, I had no idea of the word in Portuguese so I had a blast laughing with storekeepers at my attempts to describe snaps attached to bias tape and sold by the meter.
I made two friends that I plan to visit again. Ines is a saleslady in a notions wholesale store (yes, notions in BULK!). I also met an older man who runs a diner, it's like stepping back into the 50s. He lived in Chicago for 37 years, but his English was unintelligible. He couldn't believe I actually choose to live in Brazil. I hope that Jeff and I can go together and explain better to him the Reason we live here.
It was a real victory of a day, as I returned home with 2 sets of teeny, tiny long underwear (size 2 for Park), 2 thimbles, a tomato-shaped pin cushion, and 10 meters of snap tape (bought from Ines, of course). I even found the right bus to get me back home! I can't really be proud of this, as I'm sure it was Divine intervention.
Anyway, that's my great adventure for the week. And, yes, I do realize how very dull this is for those who don't get excited about sewing notions, so I'll post a recipe shortly.
Have a great weekend,
Your Centro-exploring, busroute-navigating, sewing-notions-shopping missionary,
Thug Cam
Posted by Cam at 8:10 PM

Reminds me of when you went to Furman University in Greenville at age 16...too young to drive your own car, and you took the bus one afternoon to the sewing notions store to get counted cross stitch supplies. And to think I was worried then...
Your adventures have greatly improved my prayer life!!!
Love ya, and thanks for the birthday goodies.