The Rest of the [Chocolate] Story

[Continued from post below: . . .and my God shall meet all your [chocolate] needs . . .]
At that point, I knew I could make it on that muddy little island on the Equator. God had met not only my needs, but my wants and, despite the pity-party I had thrown for myself, He had reached out to me in a way I could relate.
We frequented that little chocolate shop for the few years that we lived there. I told the owner the story of how God had touched my heart by putting him there (I doubt that he, with his broken FrenchPortuguese understood such a flaky story told in my broken EnglishPortuguese).
Two years later, while we were on our first furlough, our son Parker was born. Parker had a mild case of hydrocephallus that eventually required surgery and the mission doctors decided that we couldn't return to the Back Side of Nowhere.
We were offered the chance to move to South Brazil. We weighed our options and felt God's leading to Rio Grande do Sul. God gave me so many signs from Him during those months confirming our decision. He also was very gracious to confirm that His will was for us to move. I felt a lot of guilt at leaving those impoverished souls on the Back Side of Nowhere. I said to my mom before we left the states, "I know it's self-centered, but I wouldn't be surprised if we got back to Brazil and found that little chocolate shop had closed up and moved to [my street in Rio Grande do Sul]."
After we got back to Brazil we were packing for the move one afternoon and I slipped out with the car. I passed the neighborhood and wanted to check on my French chocolate shop. When I got to where it had been, I was amazed at what I found. Not only had the shop closed, but the whole building lay in ruins. It had not been, but it looked as if it had been deserted for 15-20 years. The yard was overgrown, some walls had tumbled down in front. I knew then that time in the Back Side of Nowhere was over and there was no going back. I said goodbye to my little chocolate shop and came home and cried. 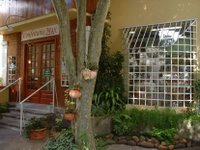 Oh yes, the ending of my sappy little story. Do you know where the chocolate capital of Brazil is? That's right--Rio Grande do Sul. There's a little German chocolate shop right down our street. They specialize in truffles of all sorts.
Posted by Campbell Dunson at 10:17 PM

And do you remember when you took Yo Momma in with you and her God supplied all her needs when the French chocolate chef turned on the air conditioning in his shop for the Americans ladies?

Thank you for the comment. I miss you and Blake and Parker in Brazil.

Cam,
I love that story! I am also a fan of the culinary detective story. I would always copy out the recipe but don't think I ever got around to actually making something. My detective was a caterer so she made lots of different things....sigh....wish we had a library here.