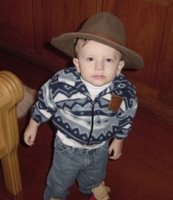 "I won't need to see him again." With that short statement, Parker's neurologist released him.
Those of you who have been our prayer partners know
Parker's story. Twenty-three months ago, EXTREMELY pregnant and in the depth of Backwoods Brazil, I began to have problems and, after two trips to the emergency clinic, I hopped on a plane to the states. We had been planning to return home for Parker's birth anyway, I just left a month earlier than expected.
During my first ultrasound in the states, the sonographer was strangely quiet. There was too much empty space in the brain cavity. Something was missing. The readings indicated a missing corpus callosum, a bundle of nerve fibers that connects the two hemispheres.
I called Jeff that evening. He and Blake had remained in Brazil to pack up and settle things at home and in the ministry. We prayed and cried together on the phone. It was terrifying.
For two weeks, we struggled with computer equipment to try and get word out to our prayer partners. I returned for regular untrasounds, each time expecting a divine healing--each time being told there was no change. Finally, we found a way to get word out to our prayer partners.
With intense prayers from our partners, we began to see the measurements inside Parker's brain change. Each ultrasound showed a little less empty space.

When Parker was born, scans indicated he had a fully developed corpus callosum. This was our first miracle.
However, he also had some mild hydrocephalus (water on the brain). We moved to Delware to be closer to the specialists at AI DuPont Children's Hospital and got on the emotional rollercoaster that was Parker's first year. The ride went something like this: see the doctor, get a scan, get a good report, rejoice, calm down, get nervous about the upcoming doctor visit, see the doctor, get a scan . . . . and so on.
The most common remedy for hydrocephalus is surgically installing a mechanism called a shunt. Having a child with a shunt means NEVER going more than 4 hours away from good quality neurosurgical care. Having a child with a shunt for a missionary family means NEVER serving in Backwoods Brazil again, and possibly NEVER serving overseas again. The doctor we had at AI DuPont just 'happened" to specialize in less invasive treatments. 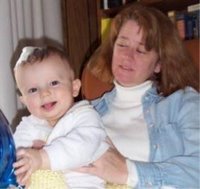 At 8 months of age, Parker began to show symptoms of pressure in his brain. To make a long story very short, Parker had reached an age when he could have an alternate procedure performed that didn't involve the installation of a shunt. (Note the second miracle). On February 15, 2005, Parker had brain surgery. The surgery he had was successful and completely fixed the problem. The roller coaster was slowing down.
Our mission did not feel comfortable sending us back to Backwoods Brazil,however, and so we did have to transfer to Porto Alegre to be able to receive follow-up check-ups from a pediatric neurologist. We were confident that Parker would remain healthy, but we did feel that God was using this incident to move us south. We moved to Porto Alegre and Parker continues to develop normally. After 3 visits to the neurologist, she has released Parker. Now that we're over the shock of the realization that we moved about 2500 miles for just 3 doctor visits, we're rejoicing. We're so grateful to God for His provisions during this long ride. We're so grateful to our prayer partners for lifting us up during it. We so grateful for our families for riding the roller coaster with us and not screaming even once!

Posted by Campbell Dunson at 10:31 PM

You go, Girl!!! You're a real prayer warrior, and regardless of your military rank, YOU'LL always be MY baby.

I admire you greatly. God did a great job!