Once Upon a Time -- The Little Rock 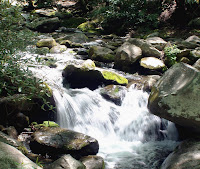 Once upon a time there was a Little Rock. Bigger than a pebble, smaller than a big rock. Little Rock lived on top of a big rock in the middle of a stream.
One day, it rained upstream. The stream's water rose. And rose. Soon it was a rushing, gushing river with rapids and currents swirling all around the big rock. Sticks, leaves and rocks floated by, swept up in the current.
Little Rock stayed on top.
Little Rock stayed dry.
Little Rock was hot.
Hot and dry, a little dusty,
Little Rock had no idea the river even existed.
Poor Little Rock.
Posted by Campbell Dunson at 8:42 PM

Labels: NaBloPoMo, Once Upon a Time